Each year thousands of testers gather in one place - eager to learn new testing techniques, see new testing tools in action and hear speakers with years of testing experience share their knowledge and insight.  This gathering is called StarEast.   I had heard about the conference, but never attended until this year ' the only thing I am sad about is that this was my first year ' wow, have I been missing out! 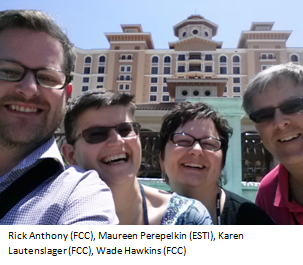 Don't get me wrong, the allure of my first trip to Orlando was a big draw, but I was pretty excited to learn more about the job I love from 'experts' who also love what they do.  Good thing, because Orlando experienced an unusual week of the most intense rain and lightning'quite atypical they said.  Oh well, that was outside.  Inside the gigantic Rosen Shingle Creek hotel, we gathered in a myriad of meeting rooms to hear what the experts had to say.

Like many conferences of this kind, there were a number of information tracks, most taking place simultaneously.  Sunday and Monday were optional days reserved for people seeking certification.  Tuesday through Thursday were the conference tracks and keynote presentations.

First, I attended the two-day Fundamentals in Agile Certification, presented by Jeff Payne.  It was obvious that Jeff loved both testing and talking about testing, a winning combination in my books.  He presented the course material as well as drawing on his significant experience to illustrate points.  This course was very interesting and now after the course I am eager for two things: an Agile project so that I can utilize what I learned, and to sign up for the follow on course Agile Tester Certification.  I think a tester in the Agile world gets big benefits: testers are automatically involved right from the beginning, and unlike the traditional waterfall methodology, testing is not the last and final phase (often time crunched when other phases take too long) but simply a task that needs to be completed in each sprint.  In traditional waterfall projects, each discipline does their work, says 'I am done' and then hands the project off to the next discipline.  In Agile, each discipline is involved in each sprint (a small chunk of work usually lasting 2 or 3 weeks) and no sprint is done until the work is done.  This means that all disciplines are equally invested in the success of the sprint. 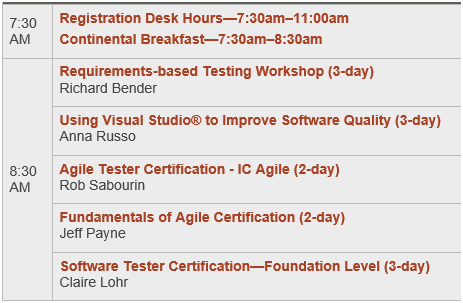 Following the two day training, I attended the Security Testing for Testing Professionals session, also presented by Jeff Payne.  Jeff discussed security testing and the impact of not doing proper/thorough testing.  Security testing may be required for a small in-house application all the way up to a big banking system or protecting government data.  In his experience the post-mortem that follows a security breach often comes back to not enough time and money was left for testing in the project and the security testing was light.  Suppressing extensive security testing to save time and money always seems like a good idea, but when a security breach happens and your SLA (Service Level Agreement) with your customer has been broken, suddenly the time/money saved earlier doesn't look so appealing.  It was a very interesting presentation.

The conference truly kicked off on Wednesday morning with the Key Note speaker Jeff Payne (yup, same guy) discussing Testing in a Test Driven World. The theme was The Good, The Bad, and The Ugly of testing.  The Good: testing drives development, The Bad: lots of testing is needed in a short amount of time, The Ugly: a belief by some that testers are not needed.  It was a great keynote; my favorite line was when he said that 'Hope is not a Strategy'.

Wednesday and Thursday were the multi-track, short (1.5 hour) sessions.  Tracks were Test Management, Test Techniques, Test Automation, Agile Testing, Performance Testing and Special Topics.  The conference wrapped up on Thursday with a Keynote by Lee Copeland titled The Mismeasure of Software: The Last Talk on Measurement You'll Ever Need to Hear.  This was a really great talk, and featured the following memorable notes:

1.  Don't turn your measurement into a goal ' GoodHart's Law which states 'When a measure becomes a target, it ceases to be a good measure."  For example if success is 25 tests cases written each day, and you turn that into the testers goals, then you will likely get 25 meaningless test cases written in order to meet the goal.

2.  When the rule above is ignored, the most common reaction after is surprise at the results.

I learned that there are a lot of people like me out there 'people who truly enjoy the testing world and were eager to learn more.  If you have an interest or passion in testing and want to learn more, you might be interested in attending as well.  Perhaps I will see you there next time!