Improving members project management knowledge and skills through education, shared experiences and formal certification; and promoting the recognition of these skills within the community.

In the first 5 years, the North Saskatchewan Chapter has developed and provided a number of services towards the fulfillment of its mission. These key services include:

Chartered in 2000, the inaugural NSC membership of 25 has steadily grown to the current 67 members. Thirty-two, or almost half, of the members have achieved their Project Management Professional (PMP) designation.

In the coming months and years, PMI North Saskatchewan Chapter volunteers will continue to work towards the fulfillment of the chapter's mission. 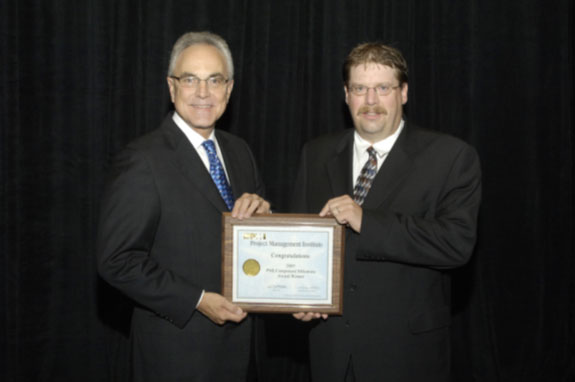 Stacy Lloyd, President of the PMI North Saskatchewan Chapter, accepts the Chapter Milestone Award for their 5th anniversary from Gregory Balestrero, CEO of the International Project Management Institute. The award was presented at the 2005 PMI Leadership Meeting held September 2005 in Toronto.

ESTI is pleased to announce that Dylan Bray (Saskatoon), Andrew Dyck (Saskatoon), Nicholas Hamilton (Calgary) and Evan Olynuk (Saskatoon) have been offered, and accepted, the Associate role at ESTI.

ESTI is pleased to receive the Dell EMC Channel Services Delivery Excellence Award for North America for 2019. We look forward to executing more successful projects with our clients in partnership with Dell EMC.

Read about our most recent Dell EMC partner achievement.